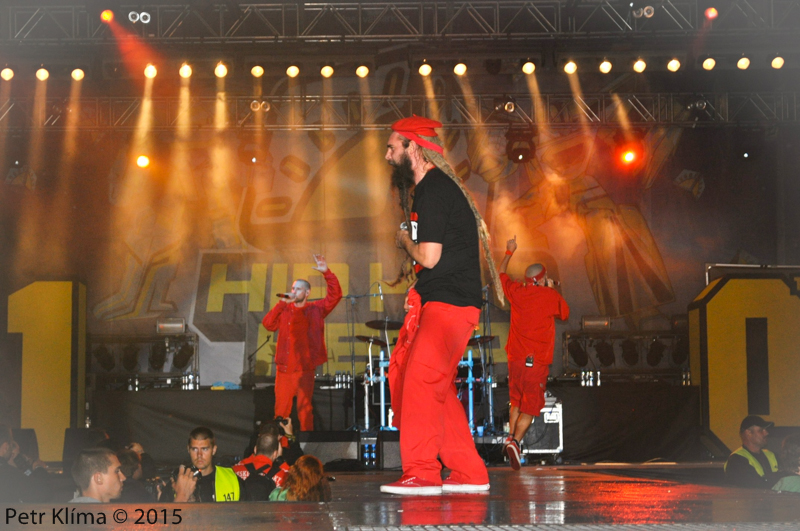 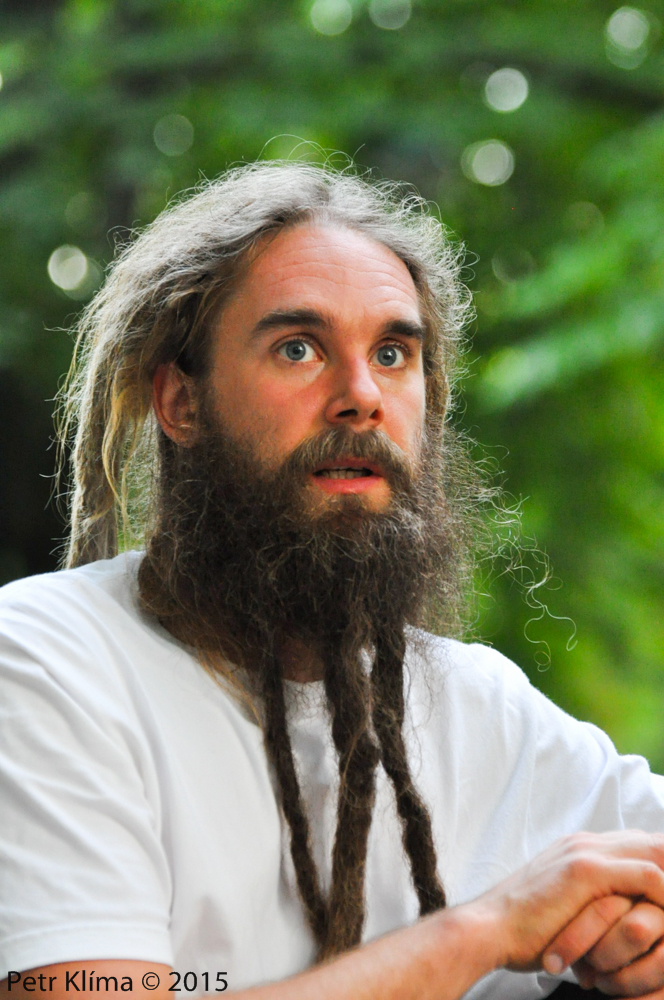 As soon as I have found out that Promoe is a vegan it became obvious to me that I have to meet him. It was soon after releasing the Loptroop’s last album Profesionals Dramers and I wanted for my dream to come true as well.  How did I get to the opportunity of meeting such a great guy who might be very mysterious and interesting at the same time, somebody who exactly knows what his targets are? Band was visiting Prague during their 2011 tour, promoting their latest album. It must have been very busy and stressful time for all the members. Their show was obviously great and very emotional as I assumed, but I still did not get a chance to meet Promoe and write this article about him. At that time I have lost my faith for a moment, but then I discovered that Promoe will be in the Czech Republic again during the very famous hip hop festival. And finally I got his response:   ,, ok, lets do on H.H K´´We arrived to Hradec Králové in late August just before the festival to meet him.  We met in the park where was peaceful and quiet and where we could finally sit together face to face and start to talk. 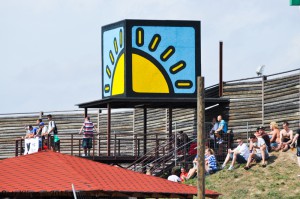 Promoe is actually for me one of the greatest personalities that I had interviewed. The main reason for that is the fact that he became vegetarian when he was 18 years old and in 2001 he stopped eating all animal products. It has been 17 years since he had meat. His veganism is acculaly related to diary and meat industry, and the whole process of food making. He is not opposed to killing animals as this is the natural process for him. Steroids, chemicals substances, including experiments with DNA, modifications of genes, this is something that he strongly disagrees with. In Promoe’s opinion the whole process is perverted and is against the law of nature. 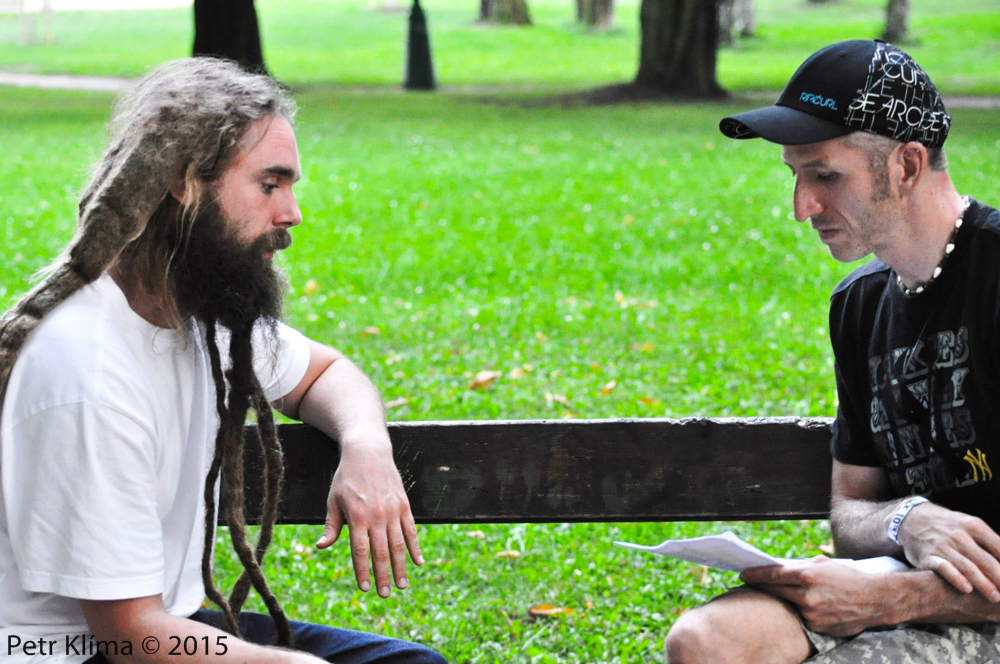 ,, In theory I am not opposed to killing, for me this  is natural way of surviving but is very unnatural how the animal industry is doing it´´

Because he changed his diet when he was very young he did not noticed any changes in his body and it did not have any serious impact on his health. For the last six years he is focusing on eating at the right times at least five times a day with  brakes of minimum three hours between meals.

,, When I was younger and I was vegetarian, I did not care too match about food. I had a big breakfast and I eat one more time in the evening, so I was eating only two times a day’’

Promoe is a pretty strict vegan, he checks carefully everything what his food contains, he has also recently stopped eating honey and replaced it with maple syrup. He doesn’t think that honey can be harmful for his organism if it is from a local beekeeper.  However he is aware of that production of conventional honey can be based on feeding bees with sugar and water only. In that case honey productions is a part of the animal industry as a whole and this is  something that Prome is strongly opposed to and does not want to take a part in or support it in any way.

He gives first place to VG medicaments however he admits that if he would suffer from any kind of life treating disease he would consider conventional medicines.

´´I don’t want to jeopardize my health, Veganism is for me just a part of doing as good as possible and when I don’t succeed I am still ok with it, is kind of hard exclude whole animals product from you live,,

For health reasons he also avoids coffee, black tea and sugar, occasionally he eats chocolate but only the vegan one. At every show he has his special ginger and lemon drink – combination of thinly sliced ginger witch fresh lemon, poured with very hot water, a kind of a ritual for him before each performance also in his opinion supportive mixture for the voice.

Promoe’s family from the very beginning has been very supportive at the whole idea of vegetarianism and veganism, when he was groing up they used to cook loots of vegetarian dishes at home. His brother mostly inspired him to become a vegan, even long before that this actually happened, telling that drinking cow’s milk can lead to metabolic disorder. All this factors has the huge impact on Promoes diet. It was however little bit harder at school where schoolmates were not always keen on understanding and accepting this individual decision. Vegan diet is not only based on removing all products of animal origin, but this is manly the process of comprehending and knowing how to supply the body with essential nutritional ingredients. Often people instead of being scared about it, as it happened to Promoe at school, they might try to be more supportive. The guys from the band are respecting this choice (Cosmic is a vegetarian and Embee used to be vegetarian), however sometimes they think that Promoe is spending too much time looking for some good places to eat and often he ends up on going on his own to chosen place while the rest of the group is eating in different restaurant. This happens especially during the tours. Being a vegan in Promoe’s opinion is very demanding: 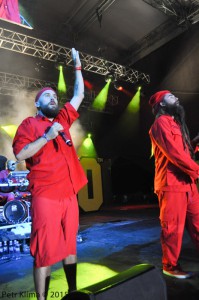 “ …it can be bad for you if you don’t think about it. Being a vegan is not only cutting meat out of your diet but it is also important to have some knowledge about food nutrition. It took a while before I have started eating well balanced and nutritionally rich VG food´´

Promoe prefers VG restaurants and VG places to eat but if there is no options for example during the tours and the only choice is the restaurant where meet is served, he doesn’t mind to go there. He tries to keep healthy as far as this is possible, he does some running in the morning, every day workouts; he has also tried yoga and played the handball before.

He likes cooking  when he is at home, using vegetable, lots of diferent lagumes including soya products, quinoa, rice and pasta. He has recently started eating more hemp products, especially hemp powder which he uses for smothies. He explains that hemp is reach in proteins and fat acids.

,, I am not that much into recepies. I am kind of basic with my cooking; I cook almost the same things´´

He usually shops at big supermarkets, not because he likes it, but this is more effective for him to buy everything he needs at once.  He prefers organic products and products from local farms. He does not differentiate between those two kinds however best option for him is when the product is both: organic and local.

,, there is a place not too far away from where I live –  where all the products are fresh and organic, where you can also find fresh vegetables´´

Promoe lives in the countryside which he prefers much more than the big city. As he has very hectic life especially during the tour, country side is for him the place where he can completely rest and recover after the shows, where he finds inspiration and strength. He says that he loves running in the forest and just being there.

,, it’s very draining to be on the tour, and when you get home you feel completely empty,, 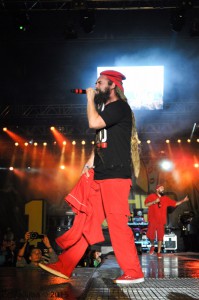 He admits that he lives great life surrounded by music, he does something what he really loves but at the same time he sacrifices a lot and he realizes that he will not be able to live such a hectic life forever.

‘’ We are on the level where we can live of the music but we also have to work all the time… I think the only way I can do it for maybe the rest of my life is if we can get on the level that we would tour maybe for 3 months and for the rest of the year we could be in the studio and also take care of our families etc. ‘’

He tries to spread the message about veganism through his songs and also in everyday life.

Promoe cut out on alcohol and drugs in 2002. He admits that he was doing stupid things while he was drinking.

,, we always had a lots of alcohol in the backstage but I was never really drinking when we did the show because I was losing focus,,

Song text:  Me, Supreme, Gangsta Pete and Schumi of course, had  a little trouble with the German police force (aha)That’s why I had to stop drinking ,Coz when I start drinking is when I stop thinking.

Promoe confirmed that there is a smoking ban in the clubs in Sweden. He still remembers the days when he was losing his voice after couple of show because of the cigarette smoke.

,, sometimes when we play in countries where smoking  is not banned then you remember how it was again, how could we even do this before,,

Tobacco industry in his opinion works as same as the meat industry. He knows that people don’t want to hear about it, just want to live their lives without even realizing how everything is connected and how this affects the world.

,, I am not going to judge you if you do it, because is not up to me to judge people, but still  I has to say what I feel”

All members of Looptroop band are originally from Sweden; inspired mostly by American rap. They have started to sing in English as at the time band was formed in 1991 there was no Swedish hip hop.

,,The reason why, we most of the time, still rap in English is because that’s how we can spread our music outside of Sweden´´

One of the band rapper Cosmic, left Looptroops in 2007 and came back three years later, he took a break as he needed to find new inspirations, he got to the point that he wasn’t inspired by the music anymore.  They missed him especially as a good friend.  At that time they couldn’t focus on his absence but had to concentrate on new album and moving forward.

Promoe has a background of graffiti-writing and some of his songs are related to graffiti. As a youth he was part of graffiti crew Babylon’s Falling. He also says about himself:

,, I am graphitti writer / shoplifter’’